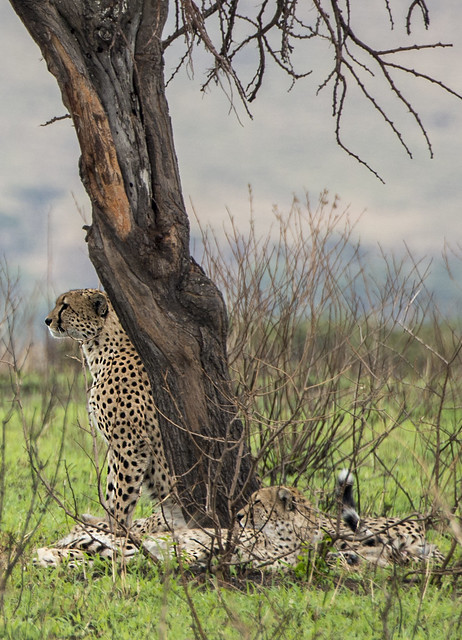 You will be picked up at Kilimanjaro International Airport and driven to Arusha for dinner and an overnight stay. Before embarking on your 4-Day Budget Safari adventure, you can take a walking tour through a coffee plantation or visit Arusha National Park if time allows.

Dinner and overnight at the Merves Hotel in Arusha, or somewhere similar.

After breakfast, you will be picked up from your hotel and transported to Tarangire National Park. With its massive baobab trees, perennial Tarangire River, and seasonal swamps, this park is home to the largest elephant herds in northern Tanzania.

All year, elephants, giraffes, bushbucks, hartebeests, dik-diks, waterbucks, warthogs, and reedbucks should congregate on the riverbank. Furthermore, the park is home to buffaloes, zebras, and wildebeests, all of which are constantly pursued by a variety of predators such as lions. Leopards are occasionally seen, but cheetahs are extremely rare.

You will be able to take in the scenery and observe the animals from the open roof of the vehicle. After an extensive game drive, you will depart the park in the late afternoon and drive to your overnight accommodation at the campsite.

The park is home to the world’s largest animal migration, and depending on the season, you may be able to witness this spectacular event. Wildebeest and zebra herds migrate from the northern hills to the southern plains during the short rainy season of November and December before returning to the north during the longer rainy season of April to June.

The location of the migrating herds is determined by the amount of rain that falls each year, but your guide will know the best vantage points for wildlife viewing. The night will be spent at a campsite in the Serengeti’s heart.

Just after an early breakfast, we make the most of the day by departing on our morning game drive. The adventure will continue later when we travel up to Ngorongoro, another African landmark.

Our drive takes us back through the Serengeti on a different route, giving us plenty of chances to see the animals that eluded you on day two. Thousands upon thousands of animals in herds can be seen as far as the eye can see; wildebeests and zebras migrating together; tall and graceful giraffes; jumping antelopes and gazelles; the powerful African elephant; and the most revered group of animals: lions.

You will return to your camp for a hot dinner and overnight on the rim of the Ngorongoro Crater after an extensive game drive.

After an early breakfast, you will begin your descent to the crater floor on a narrow and steep road. Some people consider the Ngorongoro Crater to be the World’s Eighth Wonder. You’ll quickly understand why this vast, verdant caldera has earned such a high reputation when you see it for the first time from the panoramic viewpoint.

Zebras, hippos, hyenas, wildebeests, warthogs, and the famous “Big Five” – buffalo, rhino, lion, elephant, and leopard – share the crater with a diverse range of wildlife. You will leave the crater after extensive game viewing and a picnic lunch and travel back to Arusha or the airport, where you will arrive in the late afternoon.