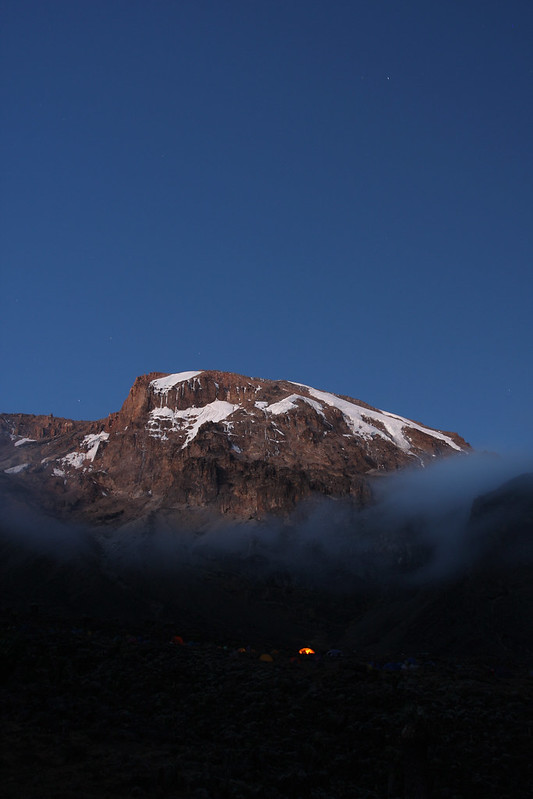 The Lemosho route is an excellent option for your ascent. Because of its ideal balance of low traffic, beautiful scenery, and a high summit success rate, it is our preferred route. Starting with a long drive to Londorossi Gate, it approaches Mount Kilimanjaro from the west. The first two days are spent trekking to Shira Ridge through the rainforest.

Unlike the Machame route, which simply intersects the Shira Plateau, the Lemosho route crosses the plain from west to east in a pleasant, relatively flat hike. Taking this scenic route has the added benefit of low traffic until it intersects with the popular Machame route. The southern circuit, which includes Lava Tower, Barranco, and Barafu, is then followed by Lemosho. The Mweka route is used for descent.

Arrive at Tanzania’s Kilimanjaro International Airport. After clearing customs and immigration, a Mbassa Adventures representative will greet you with a board bearing your name. A private transfer will take you to your hotel in Arusha, which is 40 minutes from the airport. Planet Lodge (dinner and overnight)

After breakfast, leave Arusha for the Londorosi gate, where you will register. After that, drive to a road near Lemosho Glades and begin the rain forest trek to the rain forest camp (Big Tree) [2440 m/8000 ft]. Today’s journey will take you along Chamber’s Route, a seldom-used trail. In some places, the vegetation is so unaffected by humans that it grows right across the narrow track. Flora and fauna are more abundant here than on other more popular rain forest routes. Walking for 3–4 hours

A full day’s trek with a height gain of over 600 m (2000 ft) will take you to Shira camp for lunch. At around 3050m or 10,000 ft, this is a beautiful valley just outside the Shira Crater. Following lunch, you will cross into the Shira Caldera, a high-altitude desert plateau rarely visited by humans. Shira is the third volcanic cone on Kilimanjaro. Its rim has been eroded and blasted away by weather and volcanic cones, and it is filled with lava flow from Kibo. Weather and volcanic activity have eroded and blasted away its rim. Today you camp at Shira One in the Caldera at 3500m (11500ft). Expect the first close-up views of Kibo, Kilimanjaro’s dramatic summit cone, on this day.

Begin your journey after breakfast. Trek east across the Shira Plateau via Simba Camp after two to three hours. Shira II (Hut) is today’s camp, about a 12-hour walk from Simba at 3840m/12600ft. The views across Shira are breathtaking. If you want to try the acclimatization trek to Shira Cathedral, you can start early in the morning. The views from the top of this ridge are breathtaking. If you suffer from vertigo, you should exercise extreme caution.

You ascend to your camp near the base of a formation known as Lava Tower at 4600m/15,000ft elevation after breakfast in your camp. Plants native to the alpine zone, such as giant lobelias, giant species, tussock grasses, and helichrysums, will be visible during your hike. Most insects cannot survive at this altitude, but you will see some bird species such as the white-necked raven, various sunbirds, Jackson’s francolin, Vréaux’s eagles, and swifts. Small rodents such as four-striped grass mice have been spotted (5–6 hours walk).

The Southern Ice Fields (Diamond, Balleto, and Hein glaciers) come into view as you leave your Lava Tower camp, providing one of the most spectacular views on the mountain. You’ll arrive at your next camp, Arrow Glacier Camp, at 4800m (15,750ft) elevation, near the Arrow Glacier ice field, after a 3–4 hour walk. On a clear day, the southern slope of Kilimanjaro, as well as the African savannah beyond, can be seen from here. Mt. Meru’s summit, just below 15800 feet, will appear to be floating in the clouds.

Begin your ascent after breakfast by scrambling up the Western Breach wall, which reaches a height of over 5480m (18,500ft). From here, you can see the entire Shira plateau, which gives you a good idea of how far you’ve trekked! You can see the dramatic northern ice field to your left and the Furtwangler glacier to your right as you approach the top of the breach wall; you can walk right up to these glaciers that are well over 50 feet tall! These massive glaciers are set against a dramatic backdrop of black volcanic rock. If there isn’t any snow, take advantage of a fantastic photo opportunity. To put things in perspective, your high base camp in the Crater, past the Furtwangler glacier, will be just below Everest’s base camp in altitude! (Walking time: 5–6 hours) You have the option of going on a trek to the volcanic vent (Ash Pit). If you want to, you can do it from here.

This is the moment you’ve been looking forward to. After a light breakfast, you start struggling for the last part of the climb to the top at 6 a.m., and it takes about an hour and a half to reach the Rooftop of Africa (Uhuru Peak, 5895m/19,340ft). The Mawenzi Peak to the east, Mt. Meru to the west, and glaciers such as the Furtwangler glacier, the Northern ice field, and Reusch crater can all be seen from here. After getting our summit photos, you’ll descend via Stella point, stopping for lunch at Barafu huts along the way, and then continuing down to Mweka camp at 3100m / 10,170ft for your final night on the mountain. From the summit to Barafu camp, it takes about 3–3 12 hours, and then another 3 hours to Mweka camp.

Following your breakfast back at camp, you will need to make your way through the jungle to Mweka Gate, where you will be awarded a certificate and given some time to take pictures before leaving. Following a delicious picnic lunch, you will have a private transfer to your lodge in Arusha, where you will be treated to a welcome hot shower, dinner, and overnight accommodations. (The distance from Mweka camp to the exit gate can be covered on foot in approximately two and a half to three hours.)